The soft agar colony formation assay is a suitable technique for monitoring anchorage-independent cell growth. In this assay, a base layer of agar will be added and solidified first, followed by plating a top layer of soft agar mixed with cell suspension. This prevents cells from adhering to the culture plate, while allowing transformed cells to grow and form colonies. The principle behind this assay is that normal cells are unable to proliferate without the contact with extracellular matrix and undergo apoptosis, a process known as anoikis. On the contrary, transformed cells are capable of growing without binding to a substrate. Therefore, cells that are able to form colonies in an anchorage-independent manner are considered transformed and carcinogenic. The soft agar assay is a widely used in vitro approach in assessing cellular transformation.

Another common use of the soft agar assay is to determine whether test compounds are able to inhibit tumor growth in vitro. Colony counts or colony sizes are quantitative read-outs for this assay and can be compared between control and treated groups to evaluate differences in cellular tumorigenicity.

Figure 1. Schematic representation of the soft agar colony formation assay. A. Plating of the base layer of agar. B. Plating the top agar layer containing cells. C. Adding the growth medium and incubating the cells for 14-28 days. D. Counting colonies.

In the soft agar colony formation assay, cells are cultured in the semi-solid agar medium for 14 to 28 days, depending on the speed of colony growth. Following this incubation period, newly formed colonies can be analyzed morphologically and quantitatively.

Creative Bioarray provides soft agar colony formation assay service to support cell transformation and tumorigenesis studies and to help identify potential anti-cancer drug candidates. A key advantage of this technique is that the soft agar selectively promotes the growth of cells that are capable of proliferating in an anchorage-independent manner, which closely resembles to in vivo tumor formation. 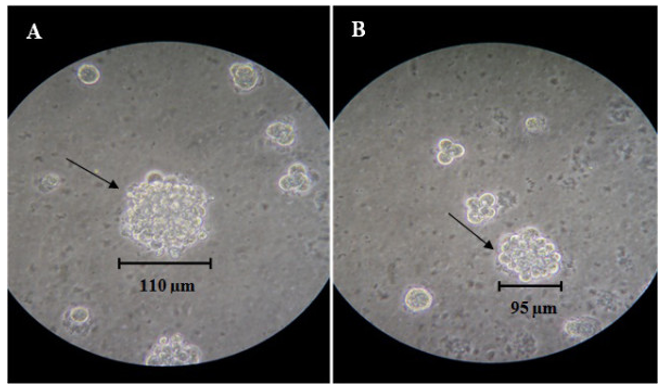 Figure 2. Colony formation of the MBC1 (A) and MBC2 (B) cell lines in soft agar at 14 Days post seeding. Magnification, 10X.

How to Place an Order