The transwell invasion is a simple and versatile experiment to study cell invasion, which is based on two medium containing chambers separated by a porous membrane. The porous filter is overlaid by a thin layer of extracellular matrix (ECM), and then cells will be seeded into the top chamber. The ECM can occlude the membrane pores and invasive cells can degrade the matrix and move through the ECM layer, whereas the non-invasive cells will be blocked from migrating through the ECM layer. The invasive cells which crossed the membrane pores can adhere to the bottom of the filter and be stained and counted with a microscope. The cell lines and ECM can be variable and the cell culture inserts and sizes can also be a broad difference. Thus, this technique can be applied in many studies of cell invasion such as human trophoblast, melanoma and colon cancer invasion. 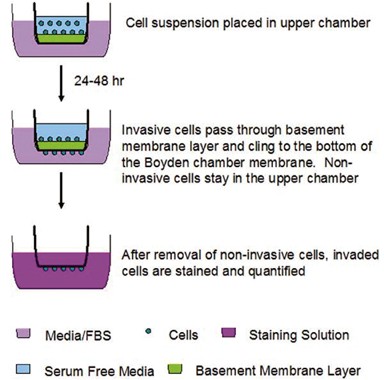 Transwell invasion assay has many advantages in the study of cell invasion. Compared to other experiments of cell invasion, it is relatively easy to setup and cost-effective. At Creative Bioarray, many excellent and experienced experts qill optimize the experimental protocol according to your requirement. Meanwhile the advanced platform including the high throughput living imaging system guarantees the high quality results for you research.