The research of the interaction and invasion behavior plays a crucial role in the studies of the mechanisms of cell invasion which is significant in malignant metastasis of cancer. Both the determination of the interaction and invasion behavior can be achieved with the spheroid confrontation assay. And this assay can monitor cell mobility in a three-dimensional model in vitro which is a great advantage compared to other invasion assays based on the two-dimensional modal.

In this approach, two performed spheroids derived from two different cell types, one is of invasive character and the other is noninvasive type. Both of them are cultivated side by side, which eventually commence to fuse. Both of the two different cell types are fluorescently labeled with two different dyes and spheroids of these cells are formed in a medium with proper concentration of methycellulose. Therefore, we can easily monitored cells either infiltrating the opposing spheroids as single cell or as collectively exhibiting a non-invasive phenotype. In the non-invasion case, a distinct margin is formed at the interface between the two cell types. The invading cells can be quantified by either confocal imaging system or immunohistochemistry analysis including paraffin embedding and tissue section. If the cells express distinct markers, cells can easily be differentiated immunohistochemically. 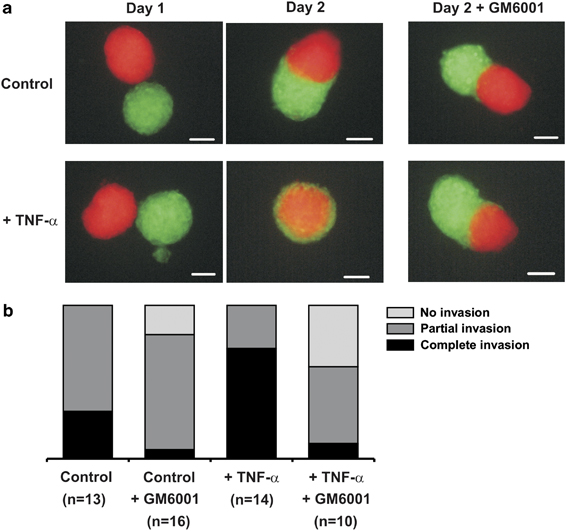