In experimental cellular biology, invasion is defined as disruptive, proteolytic, cellular movement through three-dimensional barriers. Despite intense study, the complex and heterogenous mechanisms of invasion and metastasis remain imperfectly understood and several mechanisms exist in collective or individual invasion of cancer cells. Thus, there is a need to establish robust, reproducible assays to target the process and get a detailed analysis of invasion. The three-dimensional (3D) spheroid invasion assay is a simple and convenient method to research cell invasion, which is based on the uniform and self-assembling 3D tumor spheroids.

The three-dimensional (3D) spheroid invasion assay can provide a rapid, automatable invasion system to determine cell invasion such as tumor cell. This method is also highly reproducible and has many other advantages than other invasion assays. During the process of three-dimensional (3D) spheroid invasion assay, spheroids will be formatted in a 96-well plate and each well will format one spheroid. A semi-solid matrix is generated by the BMM added directly to each well into which tumor cells invade from the spheroid body. Then the cell invasion is monitored by the imaging cytometer, which scans a 96-well plate within 10 minutes. The extent and rate of the cell invasion can be measured in a dynamic fashion by using the confluence application, whatever the invasion is achieved by single cell or by cell clusters spreading out from the tumor spheroids and invading into the matrix. The determination of cell invasion in this method is helpful for the further understanding of the mechanisms of metastasis of cancer. 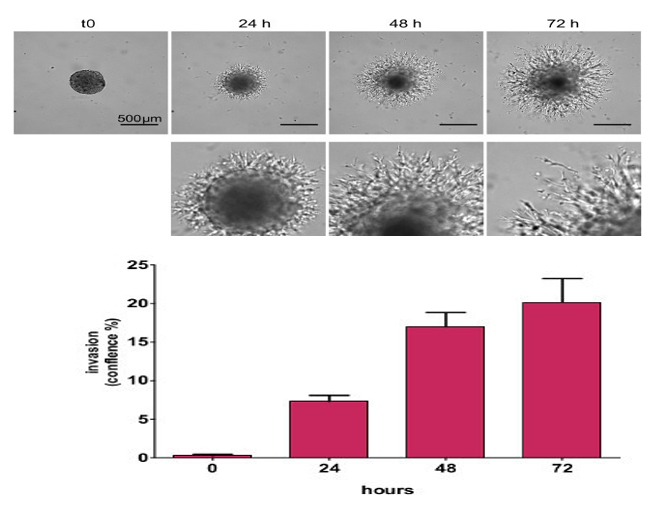 This method to study cell invasion can provide great advantages over other in vitro cell invasion assays. In three-dimensional (3D) spheroid invasion assay, the tumor cells are organized into a 3D culture, which could mimic a tumor micro-region or micro-metastasis. Another advantage of this assay is high reproducibility, since the spheroids are highly reproducible in size and this assay is performed in the same plate without the need to move the spheroids to another plate. In our laboratory, the application of the latest technologies of automated image analysis enables the high throughput analysis of cell invasion.